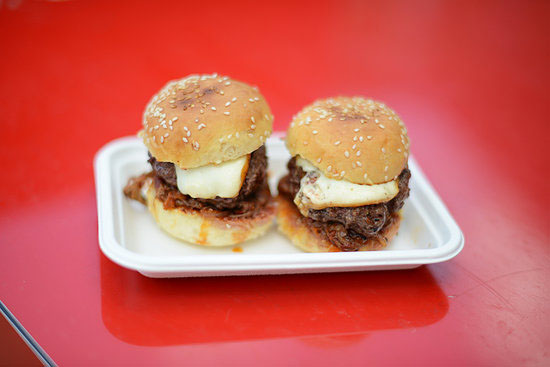 The Burgers Are Off

Burgers on the street used to be a joke. Cooked from frozen, with limp lettuce and dubious ‘meat’ content, they were part of the problem. Some people found it funny. We didn’t. But after Yianni and the MEATwagon, they became part of the solution. They started winning awards. They started being an agent for change, and everyone started having a go at doing a decent burger. This month even sees National Burger Day (sold out by our friends at Tweat Up). It was all looking so positive. And now what — you’re telling me IT’S ALL OVER?

According to the industry newsletter Propel, burger popularity is on the decline. The story, based on research undertaken by the foodservice consultancy Horizons, shows that while burgers are still the nation’s number one main-course dish, their popularity has peaked. Some 17% fewer dishes on menus featured burgers compared to last year, while hot dogs continue to become more popular, appearing on 86% more menus than they did this time last year, with pork ribs the second biggest riser, at 15%.

The report’s author, Nicola Knight, Horizons’ director of services, said: “We are seeing a high level of innovation on menus. Many of the ideas are coming from the US, but street food and ethnic flavours are also influencing menus. Operators are also working hard at providing customers with something new, often by putting a twist on old favourites.” One example is the new toppings being added to macaroni cheese, a dish rarely seen on menus a few years ago.

Top five Menurama findings: 1. Burgers are still the most frequently found dish on menus, although their popularity has peaked; 2. Japanese Katsu dishes, Middle Eastern flavours and Korean foods are appearing on mainstream menus; 3. Presentation is becoming more innovative, with food served on “planks” or “trash can lids”, echoing street food; 4. meal-deal promotions are becoming less frequent; 5. “Free-from” dishes have risen 9% since summer 2013; 6. Sharing dishes such as sliders are a firm favourite on casual dining menus, up 64% since summer 2013.