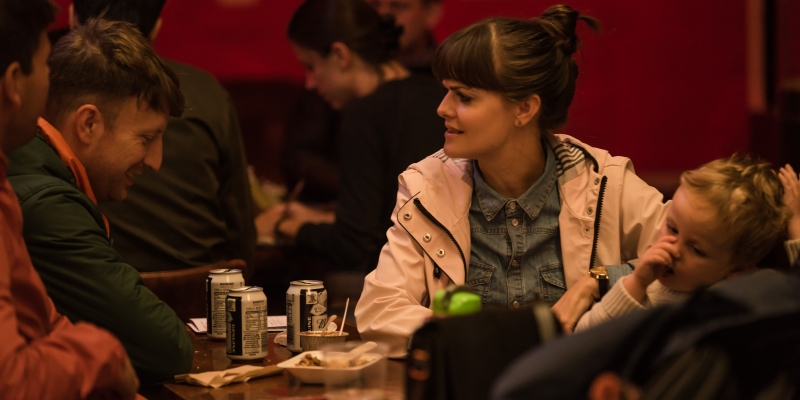 The winners from five heats lined up in London — Derby, Edinburgh, Portsmouth, Leeds and Milford Haven. Want to know just HOW far street food has come? How we can justify the ridiculous statement that “British street food is now the best in the world”? Just have a look at the entry dishes below. But the finals weekend was a real team effort. So a heartfelt thank you to JD and the amazing Street Feast team; Hellmann’s and NCASS for supporting British traders; and Richard Corrigan, Pip Lacey and Gizzi Erskine for their time and love this weekend — and judging 34 plates of food.

Thank you to Naughty Boy and the Naughty Kitchen (raising money for Great Ormond Street with that chicken tikka linguine) and to Loyle Carner and his Chilli Con Carner cookery school for young people with ADHD and dyslexia, who were pushing out high-end burgers to raise money for the school’s expansion. Thank you to Hugh, Jess and Madeleine for running team BSF (and counting votes under extreme duress) and to Ridley Scott Associates plus Joe and Rhiannon at Altius for believing in the dream. We’ve got Big News in 2019.

The Best Dessert category had never been so closely fought. Crema Caravan drove 9 hours from Edinburgh to London, and people were so enamoured with Florence the Renault and her crema Catalana that mum’s word was forgotten ­­– turns out you CAN have your dessert before you finish your supper. Up against them were Love is Churros: among the nicest people in street food. Just not easy talking to them with a mouthful of lemon meringue and fried dough ­– a kind of British fairground favourite, crossed with a classic British pudding, that chef-restaurateur Pip Lacey called ‘a really nice idea’. ‘You look at it, and you go, “WOW”,’ said Richard Corrigan at the Judge’s Table.

It was the legendary Michelin star chef who took a shine to the winner. After he dazzled Tom (Doh Hut’s founder) with his 70s Leeds football knowledge (this when Tom doesn’t even like the sport and hadn’t a clue what he was on about). Turns out Corrigan isn’t a fan of Leeds anyway, but he is one of Tom. ‘He knows what’s what. He’s full of enthusiasm. You could roll him out on breakfast TV.’ High, um, praise from a chef of 40-odd years.

You can’t underestimate the pressure on the traders. Parm Star were literally shaking in their shoes. Understandable, when you have four of the food and restaurant industry’s biggest names picking apart your food. Need they have been worried? ‘It’s fucking delicious,’ said Gizzi Erskine of their parmo. ‘I didn’t want to like it, but I do.’

Gizzi summed up the judges thoughts ­– it was ‘impossible’ to separate them. Especially when Tambapanni were putting out a prettily-plated jackfruit curry ‘the calibre of restaurant food,’ she said, when Ruby’s was ‘really fun’, when Carlo of The Peruvian was ‘one of the most talented chefs here’ and when Buddha Belly’s massaman and panang was so utterly ‘delicious.’

Anyone could feel gutted for Buddha Belly ­­– leading the way in the People’s Vote after day one, and looking like favourites to win it. But up crept Jah Jyot, only seven votes ahead when voting closed. While it didn’t go their way this time, the ‘devastated’ Buddha Belly ­– this being far from their first BSF Final rodeo ­­but by the sounds of things their last – will always have their place in the BSF hall of fame.

And what of their fellow Brummies? The Patty Freaks? Plenty to shout about, re-inventing the Big Mac. Gizzi was a big fan. Still, no easy competition with two-time BSFA finalists The Buffalo Truck in the same category. The People’s Choice from the Scottish Street Food Awards took a pedestrian dish – the humble chicken burger – and raised it to the heavens, with perfectly crisp coating and just the right amount of seasoning.

By the way, Scottish Street Food Awards wild cards Ginger & Chilli put on a great show. Everyone wanted a piece of them, whether it was the kati roll tacos or their take on cullen skink. ‘The Scots are VERY good at throwing things together,’ said Corrigan.

Their rivals for Best Snack weren’t going home without a scuffle. Assembelly fought their corner with some popcorn cockles which got ‘full marks’ from Corrigan, while Mangiamo had theirs covered with ‘the best pizza toppings in the business.’ ‘And the only place to put kale on a pizza and get away with it’ said BSF founder Richard Johnson. Paternoster Farm brought their own reared Mangalitza pigs, in their confited, deep fried form, to the table. Call off the search ­– it was the beer snack to end all beer snacks. The provenance of Paternoster Farm is second to none. ‘Truly farm to fork food,’ said Johnson.

And fair play to ROK Kitchen, sticking it out while their little patch of Korea got more than a little rained on. It didn’t stop people coming back for seconds, we noticed. A tip of the hat to Wallace, too, for taking their prep to the extreme. ‘Love the way Wallace & Sons make their own baos. By hand,’ said Johnson. ‘No cash and carry here – just real art and industry. So proud to be involved with everyone here.’

BEST OF THE BEST

The Peruvian
Anticuchos: Cow heart marinated for 24 hours in a Peruvian spice blend, cooked on a BBQ and served with potatoes and Peruvian corn.

Paternoster Farm
Chicharrones: Pork belly from our free range Mangalitza pigs, confited for 12 hours, then deep fried and served with cumin salt and lemon. The meatier cousin to a pork scratching!

WINNER Doh’Hut
The Classic: Donut dough is made with fresh yeast and proved three times over 30 hours to ensure great flavour & a light fluffy texture. Each morning the donuts are rolled out to size by hand, proved for a final time and then fried to perfection.

View our Awards Archive below