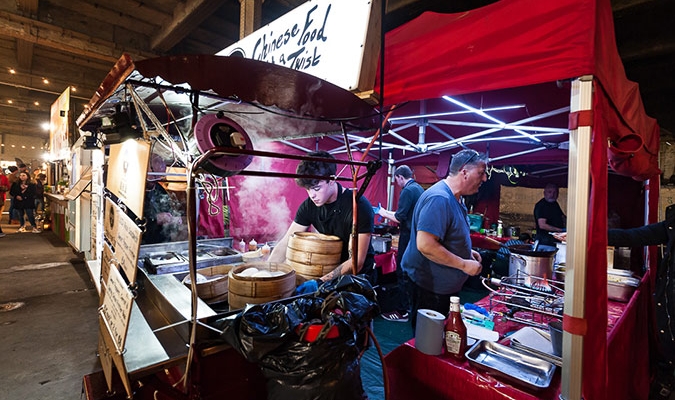 Picture the scene: A rock blocks the entrance to a cave. The rock rolls away and a bearded man appears. But he’s not in white robes, bathed in the holy light. He’s in shorts, an apron, and backwards baseball cap. He lifts a pizza paddle aloft. People swoon.

Yes, street food season has begun. And with it, a bunch of new markets and festivals. Not long ago, city centres we the pretty much the only place you’d find them. Now, they’re everywhere. From seaside towns where the average age is high and the wind speeds even higher (pity those gazebos), to food clubs set up in council carparks by well-travelled individuals wanting to lay it on for their own neighbourhoods. Them we salute.

So the saying’s true – all good things do come to those who wait. Just ask the people of Hastings, who’ve got their very first street food festival right on the pier, organised by Stuffed (the taco-slinging horse trailer). Then Corby throws its hat in the ring with something the town has never seen before (‘they do them a lot in London,’ the founder tells Northants Telegraph. ‘I go to a lot of these events and wanted to do something locally’). Catford’s slice of the action comes in the form of a brand new community-sourced street food market on their little patch of South East London. After its first week, it’s already a hit.

As you can tell, now’s definitely a theme for firsts. Present company included. At the end of May, the BSFAs swing by Portsmouth for once, while the inaugural Welsh Street Food Awards kick off in August – what with Welsh pedigree being so formidable in past years. But not in Cardiff see you — Pembrokeshire. Street food’s back in business? There’s a reason to be cheerful.