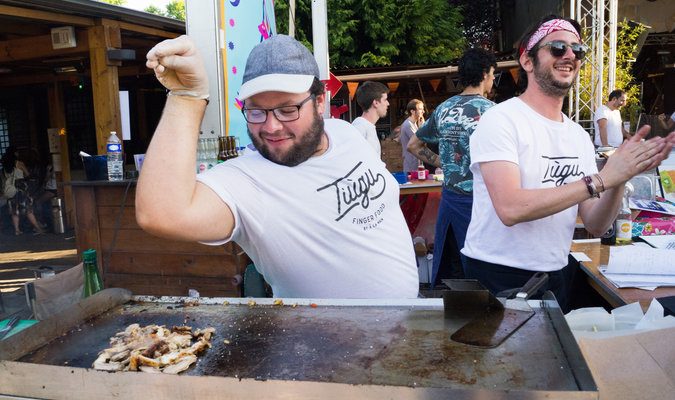 Two centuries after Antonin Carême introduced grande cuisine, France is in the throes of a revolution. And – of course – it’s taking place on the streets of Paris. But this revolution is all about democratising the way the French eat. And it’s being led by les street food traders, ranged against the old-fashioned restaurants and their outdated approach to food. Allons, enfants de la patrie.

Last month in Paris, Julien and Antonin from Tiugù by A La Main were declared winners of the 2017 French Street Food Awards, held by Bistronomie Club. So, now the Dutch champions are joined by the French. And we’ve just been joined by the Irish. With Spain, Italy, Sweden, Germany and Britain already raring to go. And a last minute ‘mystery’ entrant expected next week. But do the French go into this contest as favourites? And should the rest of Europe be afraid?

Hello, can you introduce yourself and tell us about A La Main?
We are Julien and Antonin, two childhood friends, we grew up in the same area [of Corsica], with families of vine-growers and farmers. We arrived in Paris a decade ago and went to a very well-known grocery store, famous for its musical evenings and its Corsican products, but the place was closed. At the time, I was working in an events agency, and Anto was in show business. So we decided to combine our desire to work with the seasons — and a passion to work with producers — and set up something ourselves, becoming, in a way, the Corsican ambassadors in Paris.

Where do your products come from? How do you choose them?
Our products come directly from our Corsican producers, who we visit every two months or so. We do real groundwork since the best discoveries are made on the ground. For instance, we only work with “Porcu Nustrale” — the recognized breed of 100% Corsican pigs. There’s nothing better than taking Anto’s car and going to find the best of the best.

Is there a difference between Tiugù and A La Main?
Tiùgu is an event brand that we have created to launch us in the world of street
food. Tiùgu is the phonetic pronunciation of the Corsican word “Chjucu” which means “small”. Like small plates. We wanted the brand to be offbeat, fun, modern and with a Corsican accent.

Are you nervous about the European Street Food Awards?
Tiugù has only just been born, so we’re saying to ourselves, ‘Why us?’ But we will fine-tune the recipes and play on our madness – madness is in our DNA.