Pellizco – Sheffield – The winner of the 2020 British Street Food Award for Best Newcomer sponsored by SumUp. But Danny is a year older and wiser, and his combination of classic Mexican flavours, using specialist ingredients that aren’t readily available in this country, gets better by the day. All tempered by techniques learned from years in the professional kitchen. Expect locally-sourced Yorkshire ingredients and worldwide flavours.

Kara’s Kitchen – Doncaster – Kara cooks her paella out of a quirky street food stall made from old cutlery and reclaimed wood from a 1950s pub. All of her ingredients are locally sourced from one-man band stallholders – such as her fishmonger in Doncaster market. She buys the best chorizo, with a good fat content, in raw links. All her sauces are homemade and she uses the finest paprika and smoked salt from Spain. Plus – most important for paella – KARA SAYS NO TO HOT HOLDING. So her paella is always fresh. You might have to wait. But it’s worth it.

ROK Kitchen – Essex – This finalist from the 2018 and 2019 British Street Food Awards, serving authentic Korean, wants to go one better this year – and actually win The Big One. In the next 5 years chef Steve wants to have stalls in Australia working the winter months so he can base himself in the UK for the summer. “Plus I still have ambitions to be the UK’s first Michelin star street food”. Get him.

Skullduggery – Coventry – Dessert illusionists serving up everything from roast dinners to jacket potatoes and fish and chips – as cake! Kicking off the whole “cake or fake” TikTok trend they’re planning to bring their A game to the finals – and a specially-commissioned cheesecake chariot. Steph creates all the desserts in her little kitchen at home, but has recruited her parents help. “My mother Rita bakes a lot of things, shortbread, cakes etc, she used to be a food tech teacher until she retired and has always made cakes. My dad Paul helps create anything and everything – from mechanical cakes to being chief label guy on all packaging. Also finalists in our Best Newcomer category sponsored by SumUp.

Archchi’s – Manchester – Prepare for an exquisite Sri Lankan ‘hopper’ menu. Archchi (pronounced Ar-chee) means grandma in Sinhala because the business is based on Chloe Smith’s family recipes. The couple moved back to the U.K. days before the first lockdown in March 2020 after losing their jobs. Their food was the subject of a film by Manchester Finest which went viral in Sri Lanka, won them Northwest street food young trader of the year and now a place as a BSFA finalist. Also finalists in the 2021 Best Newcomer category sponsored by SumUp. 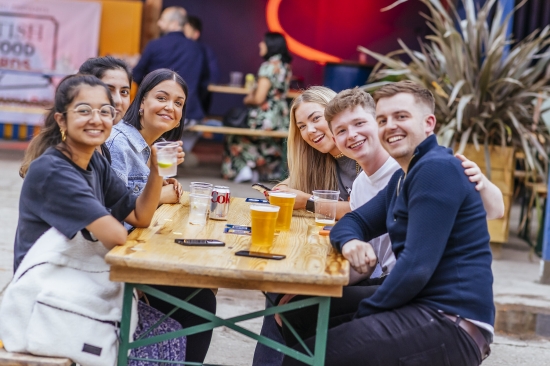 Fire and Flank – Cardiff – A newbie on the streetfood scene, Fire and Flank are all about steak cooked over fire. With a flame thrower actually – powered by butane. Only once the top steak has come out of the sous vide. Served up with a DELICIOUS array of sides (not often you see spinach and dauphinoise potatoes on a street food menu) this ingenious concept is housed in a stripped back, metal cage. Stand well back.

Antojitos Food Truck – Edinburgh – This brother/sister business was set up in lockdown – but then they went and crashed the truck! As an experienced chef in love with Mexican flavours, John wanted to do something more exciting than rice, beans, and mushrooms. So he did, and won the Scottish Street Food Awards in the process – from a gazebo. Also finalists in our Best Newcomer category sponsored by SumUp.

Janet’s Authentic – Pontypridd – Janet Wei brought her truly authentic North Chinese menu to a tiny restaurant in Pontypridd. She had never cooked on the street before, but we begged her to give it a go. She beg/stole and borrowed what she needed (NB Janet would never actually steal) and her hand-made dumplings went on to win the People’s Choice at the Welsh Street Food Awards. Also finalists in our Best Newcomer category sponsored by SumUp.

Bao Bros 23 – Huddersfield – with their home-made black bao made from activated charcoal. And a crisp halibut filling that silenced Chris Kamara at the Northern heats of the British Street Food Awards. Which is going some.

Greidys – Birmingham – Champions at the 2020 British Street Food Awards who are back in 2021 to defend their title. Their DEFINITIVE fried chicken is fried up by the ever-hungry Jay Reid (nickname Greidy) who believes completely in provenance of his wings and strips – and a magic gravy that contains ten secret ingredients.

Keralan Karavan – Cardiff – Krish’s little red gazebo is called Laal Mahal – or “the red palace where all the magic happens”. She is decorated with Indian marigold garlands and sarees, and 100% ready to compete as Keralan Karavan in the 2021 British Street Food Awards. Krish’s Bombay Tikka Taco, with Keralan-style curry sauce, wowed Sam and Shauna at the Welsh Street Food Awards. But will it beat the competition dishes from the other finalists? “It’s our take on the hard-shelled Mexican taco” says Krish, “where we crisp up the paratha bread and fill it with masala chicken, cheese, pickles, minty chutneys and Bombay Mix which is served with an aromatic sauce made from coconut milk, black stone flower, smoky tamarind and curry leaves.”