It wasn’t the easiest sell – asking the people of Cardiff to buy tickets for the 2020 Welsh Street Food Awards supported by Hellmann’s when the city was about to go in to lockdown. But they went for it. Of course they did. It’s Wales. We explained how our staff were going to be PPEd up, dispensing hand sanitiser on the door. Food would be ordered on the Yoello app, and delivered straight to the table, so no queuing and fannying about. And the advance booking system would allow track and trace. It all worked, and relaxed, happy crowd were able to witness Makasih become the 2020 Champions of Wales, with Bao Selecta taking home the People’s Choice.

We love Street Food Circus. We first worked with them back in 2015, and they’ve always supported the WSFA. This year’s final was at a new location – Talbot Gardens off Cathedral Road – and the only SFC event of 2020. “It’s been a tough year for everyone – including us” says Matt the Hat, boss at Street Food Circus. “We went from producing a series of SFC events and food arenas for festivals to zero. We’ve built this concept and business from the ground up, and this is our world. So, like many others, when the rug was pulled from under us we were unsure what to do – adapt or die.”

Thankfully, we chose to adapt, together, by pulling together one hell of a judging panel (thank you to the amazing Sam and Shauna from Hang Fire Southern Kitchen) one hell of a menu (see the finalists’ competition dishes below) and one hell of a line-up. Now the two winners will go the grand final of the British Street Food Awards supported by Hellmann’s. Could they go all the way? Check out this little lot:

Bao Selecta
It was an odd Eureka moment. Nick had made bao buns for a dinner party in 2016 and – to his surprise – they went down really well. The next morning, as he sat on his bed in his PJs with a slight wine hangover, it hit him. He jumped up, clenched his fists, and shouted “Bao Selecta!”. He was going to make bao buns on the street and Bao Selecta was to be the name.

A few months later Nick and his girlfriend Karolina rented out their house and travelled east Asia for a year. They got married in Vietnam, did cookery classes in Laos and ate at every bao stall that they could find in Taiwan.They came back, spent £200 on second-hand equipment and launched in Cardiff. Now they’re competing in the Welsh Street Food Awards. They don’t want to take over the world. They just want to stay small and make people happy. 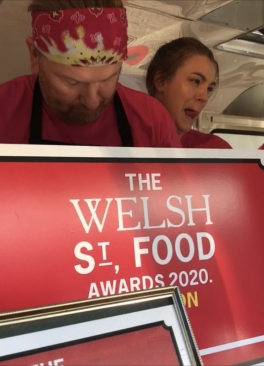 Kapow Ribs
Crazy. That’s the only word for John and Ceri Cook’s decision to launch Kapow Ribs early in 2020. Right at the start of lockdown. But they already had their logo designed and events booked in. “So we thought we would launch anyway” says John. “Only rather than the people coming to us, we decided to take our ribs to the people.

“We literally started with a £10 Nokia burner phone and put it out on social media that we were delivering ribs that Friday evening. The phone rang off the hook and we sold out in minutes. At which point we just looked at each other – with our eyes like saucers and jaws on the floor – and shouted how Kapow Ribs had got off with a bang!”

The start of 2020 saw Ruth and Roger introduce their wonderful new van Eddie to the world, and make another trip to Malaysia. But then the virus hit. “Five months went by, and Roger went to work in the catering department of the NHS. Sadly Malaysian fried chicken didn’t make it onto the weekly menu….” But now they’re back. And they want silverware…..

The Queen Pepiada
The team – in their distinctive yellow H van – see their food as a cultural engagement based around the arepa. “The arepa is the foundation stone of Venezuelan cuisine, and crosses all social and economic divides” they say. “It’s the comfort food a Venezuelan mom offers before a daunting day and also the soul-recharging meal after a heavy night out. Our flavours relate to memories of joy, camaraderie and beauty. Whoever offers you an arepa is inviting you into their home.” How can you say no?

JOLS
JOL’s from Merthyr Tydfil started trading in 2014 offering up a restaurant menu with a street food twist. Chef Jamie O’Leary also launched Patagonia, the street food brand which won him the Wales and the West heat of the British Street Food Awards back in 2015. The texture of his buttery soft 72-hour Welsh beef might have been down to the use of sous vide, but the flavour? All about the green, green grass of home. For the 2020 WSFA he’s bringing his Cubano and a Reuben to write home about.

Pwdin
A street style pudding club. Homemade in Wales, delicious luxury brownies – with street swagger. Helen is a new street food trader to Cardiff. A development chef by trade she’s worked in the industry since she was 15, creating and implementing food concepts. “Whilst working for a global contract caterer I entered into their annual salon culinaire in the street food category with a dessert option and won GOLD for Best in Show with my Apple Pie Nachos. That was 10 years ago so safe to say I’ve been trailblazing the way for dessert street food for years!”

THAT STREET FOOD VAN
That Street Food Van fell in love with the life at Street Food Circus in Cardiff. “That’s where we first saw trader after trader knocking out incredible street food dishes from beautiful trucks and trailers” says Curtis. “Within weeks, our business was registered, nights ruined writing out a business plan, and the search for the perfect vehicle was on. By the end of that year we had found ourselves our monster carpet removal van and began spending every freezing winter morning converting her into a mobile Mexican kitchen.”

But times change. So has the Welsh food scene. Curtis and Stacie were in love with Taquitos when they first got into the business and were convinced that they would be their main seller. But fast forward a few years and the couple now have a full menu of tacos and quesadillas, carne con chile, elotes and empanadas – plus a book full of other Mexican dishes they have discovered along the way.