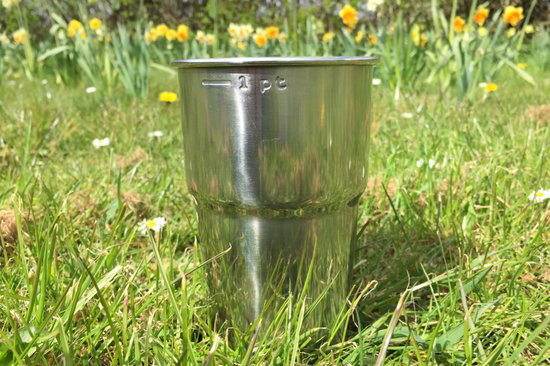 Ask me what material would best suit Glastonbury’s drinking vessels, and steel wouldn’t be the first answer. Let’s bring loads of hard, almost missile-shaped objects to a festival where people get drunk and stoned off their faces? Possibly not the greatest idea.

But founder of Glasto, Michael Eavis, along with the guidance of the festival’s sustainability co-ordinator Lucy Smith, has championed what could be the holy grail of sustainable cups. Contrary to my rather naive assumptions, steel is a sustainable material – its lifecycle is potentially endless, due to the pretty straightforward process in repurposing it for whatever you damn well like. This is why the steel cups rolling out for this summer’s Glastonbury are made from what would otherwise be Land Rovers. ie some of the least sustainable cars on the market (or, if you’re a Defender, off it).

Eavis’ main concerns aren’t necessarily what you’d expect, however. “The single most important thing was being able to source British stainless steel for the cups from the place where it was invented – Sheffield — and then to take it on to the home of the manufacturer – Birmingham.’ he said. The man has a point – something tells me we’d be less open to Chinese steel all over the place than the British stuff.