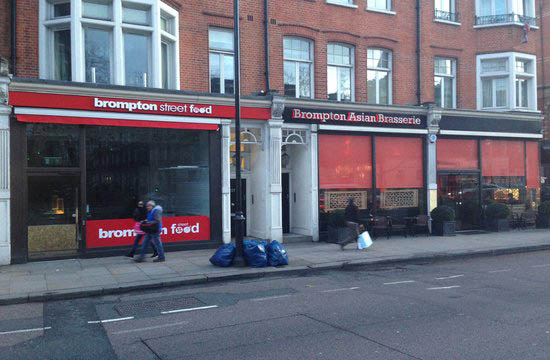 It had to happen — Michelin-starred street food. And it’s coming to Mayfair. And Chelsea. The super rich will really get to go ‘slumming’ this summer when Spain’s newest three Michelin starred chef, David Muñoz, brings his take on kerbside eating to the capital. Muñoz, chef and creator of Madrid’s three Michelin starred DiverXo, brings his street-food inspired StreetXo to London in June. This will be the celebrated maverick chef’s first restaurant outside of Spain and a return to London, the city that inspired his cooking style.  His unique representation of street food is an evolution of his travels from the exciting London restaurant scene to South East Asia and everywhere in between.

The focal point of the restaurant will be the open-kitchen with chefs front and centre, interacting one-on-one with guests, cooking and serving up “food and fun”. At least that’s what the PR told me. I’ve yet to meet a chef who signs up to deliver “food and fun”. Open and airy, StreetXo will also have a large bar with an inventive cocktail selection. The menu will change often and will feature 12-14 dishes, but guests should also look out for the trolley circulating throughout the room, serving one-off creations. Nice idea. And maybe it will give diners a taste of how fun it might be to eat street food (dare I say it) on the street? At a price that a Mayfair/Chelsea diner would expect to pay for their petit fours? Every private equity fund wants a bit of exposure to the street food restaurant market these days. Brompton Street Food (above) in Chelsea looks like its being refurbished, but no-one knows by whom. It’s next to the Asian Restaurant owned by the Russian restaurateur Arkady Novikov. Novikov has 50 restaurants showcasing 18 different styles of cuisine. Street food would be his 19th. Maybe he should give it a go? The (Michelin) Street Food Revolution……watch this space.