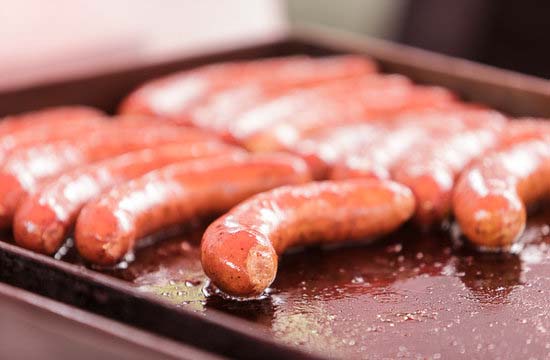 In America, hot dogs have a “season” which stretches from Memorial Day to Labor Day. But, even out of season, they’re everywhere from the backyard to the ballpark. Which is why Americans average 60 hot dogs a year. They are the perfect street food, they sit nicely in the palm of your hand,and they’re delicious. But they’ve never been taken seriously…..

They have a reputation for being made of slaughterhouse sweepings. When John Candy’s character in The Great Outdoors orders a hot dog, Dan Aykroyd’s character laughs and says, “You know what they’re made of, Chet? Lips and Assholes.” A lot of them come from a can. And then there’s the matter of the sodium nitrate to preserve the red colour.

Ironic really, with hot dogs gaining credibility in Britain. New flippers are joining the ‘haute dogs‘ market every day, and (by working with a Fat Duck development chef) Big Apple Hot Dogs even won the prize for Best Snack at this year’s British Street Food Awards.

But Dog Days is light years away from that, and centres on the unglamorous side of the business. It’s the story of the micro-entrepreneurial world of street vending in Washington DC, “and explores how two unlikely business partners navigate the cultural, economic, and regulatory barriers standing in their way.”