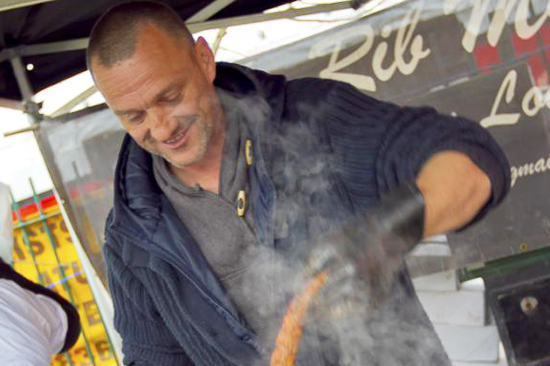 The success of street food in Britain reflects a real change in our food culture. We don’t want starter-main-course-dessert any more. It’s too restrictive. We want a bit of this, followed by a bit of that. With their new Modern Asian range – 26 dishes based on small and large plates of dim sum, noodle bowls, bento boxes and curries – M&S are doing their best to reflect that evolution in the way we eat.

Taking its inspiration from street foods in Jamaica, Turkey, Vietnam, Morocco, Madeira, Italy and Spain, Waitrose’s Good to Go range sets out to be unfussy and unadorned. It’s what inspired Jonathan Moore, Executive Development Chef for Waitrose. “Our food isn’t hidden away – no foil tray, with a cardboard lid, shoved inside a box with sexy photos on the packaging. The filling is the hero.”

M&S are also launching a “Limited Edition pop-up range”. Sounds ‘edgy’. And it’s only in stores for a short amount of time. For a supermarket to offer a range that makes a virtue of its seasonality, and – therefore its limited availability – is something new. The idea is that this range doesn’t come from a huge organisation with an enormous supply chain that can feed us whatever whenever. When it’s gone, it’s gone — a clever bit of marketing.

But traders are suspicious of the workings of big business. Take Green Goat. The BSFA finalists push a very specific message – sustainable seafood – but still managed an encouraging smile when Ugly Fish Friday pitched up next to them on Whitecross Street market in London. But the smile didn’t last long. “They came armed with massive gazebos, and a team of chefs, and were flyering heavily at either end of the market” says Green Goat’s Claude Compton. “Turned out it was a marketing swing from Lusso, a huge catering company. The chefs couldn’t name the fish on their stand or explain why it was more sustainable. Definitely a case of big business jumping on the street food – and the sustainability — bandwagon.”

Traders are used to the idea of big business stealing their ideas. “I used scotch bonnets in a sauce” says Mark Gevaux, aka The Rib Man, “then one of the supermarkets started using scotch bonnets in their sauce. Same now with nagas. If you don’t think they have spies, then wait for this coming year and see what’s next. Buttermilk fried chicken? Gourmet hot dogs ? Kimchi? Trust me – they spy.”

The fact is, the supermarkets don’t really need to ‘spy’. But The Rib Man’s right – those dishes are all on the way. M&S are particularly interested in kimchi – and fermenting, pickling and curing – as a way to introduce punchy flavours with longevity. Waitrose are putting their money on Peruvian flavours. We never imagined we would see sushi on the shelves. How soon before we get fillets of fresh fish, with lime to squeeze over the top for ceviche?

Caroline Crumby, product Developer in Global Meal Solutions from M&S, just got back from a research trip to New York where she was taken with David Chang’s steamed pork buns at Momofuku. Now she’s thinking of bringing them to M&S. She wasn’t ‘spying’. “What is ‘original’ now?” she says. “Those buns are a version of a version. It’s gone beyond retailers just looking at stuff and popping it on the shelves. What’s the original recipe? That’s why these are such exciting times.”