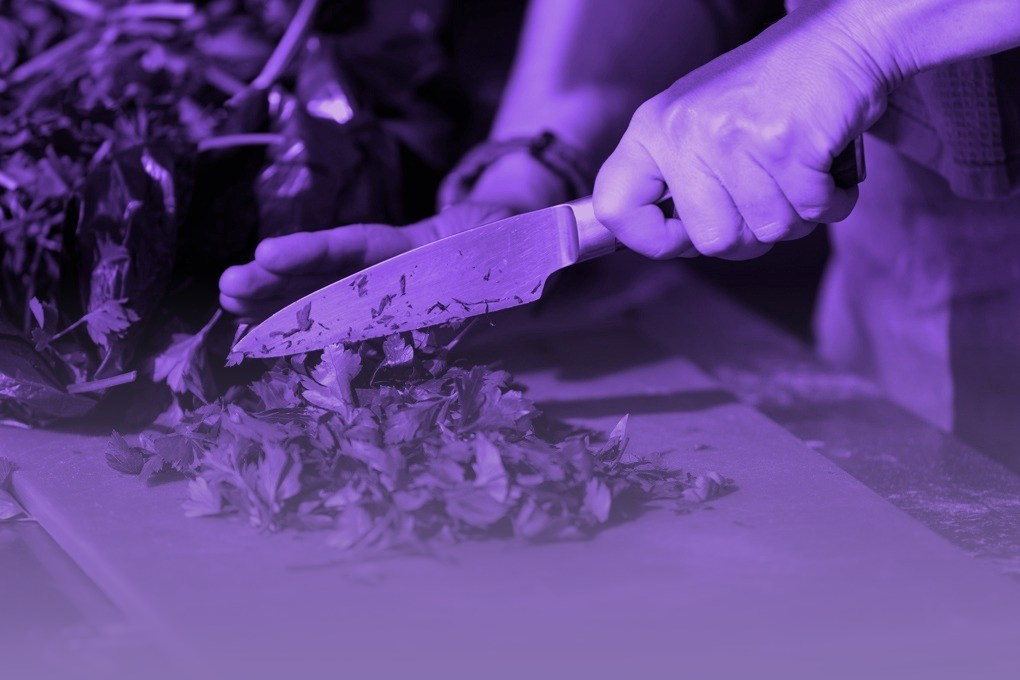 2019 was the tenth birthday of the British Street Food Awards. So it was appropriate that this year’s Awards, supported by Hellmann’s, should be the best ever. We’ve come a long way since Ludlow, baby – check this out. These days our winners get invited to compete beyond this sceptred isle, lighting up the coolest cities of Europe with their brilliance in the European Street Food Awards. But not without proving themselves at home first.

The 2019 British final got even more attention than usual. We were on Channel 4’s Sunday Brunch. Plus the ITV news. The print media loved the intense competition. We were pick of the day in the Standard. And Metro. They loved our free canapés – made from food waste. End result? Tickets sold out. Alright, the sunshine may have helped. But we’ve been doing this a long time. And these were some of the best street food menus we had ever seen.

But it was the boys and girls in yellow that the judges voted as Champions – Pabellón, who trade in Waterloo with their Venezuelan menu, won gold for their slow-cooked sauces, fresh salads and hand-made arepas as much as for their energy and affability. Veteran BSF judge, cookbook author and BAFTA-nominated actress Fay Ripley summed it up nicely: “They’re my pick for the overall experience – lovely people, and lovely food.”

Meanwhile, Utter Waffle were in the thick of it, soaking up the sun (and the punters’ votes). “Such a smiley team” said BSFA founder Richard Johnson. “And the talk of the weekend with their savoury waffles”. It helped that they had been talking about the BSFA on Sunday Brunch the weekend before. The London-based stuffed waffle-slingers picked up People’s Choice and Best Dessert for their trouble. Oh, AND Best Looking Mobiler for Reggie the Waffle Wagon. 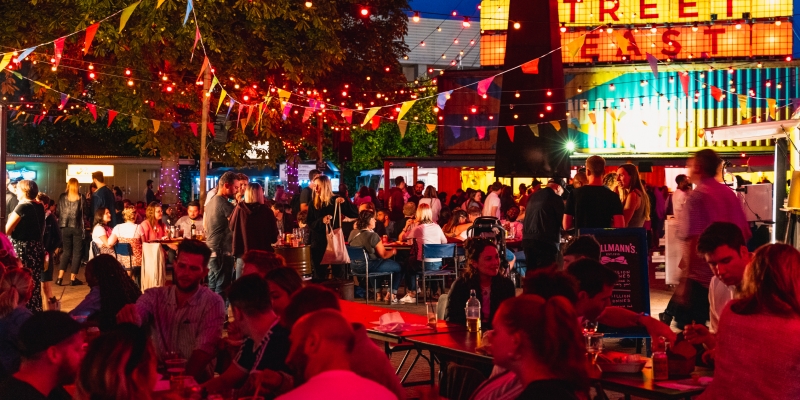 The winners from five heats lined up in London. Up and down the country, the best of British Street Food had competed to win your vote:

Competition was tougher than ever in the tenth anniversary year. “It would have made it easier to judge if there were some rubbish entries,’ commented Fay, who struggled at times with the 32 courses that she had to sample. Ranie Sirah, the reigning European Street Food Awards champion, joined the judges table and was blown away by the quality. “I’m very pleased I’m not in competition this year” he said.

Which only made winning all the more special. Pink Peppercorn from Glamorgan, the winners of this year’s Welsh Street Food Awards, picked up Best Main Dish. Alex’s attention to provenance and Slow Food – Welsh chorizo, Tenby mussels and all – giving him a leg-up on the competition. Saturday Kitchen’s Matt Tebbutt deemed it “really, really good food”, while Fay thought his dishes were, simply, “beautiful”.

Turo Turo introduced the complexities of Filipino cuisine to a very eager crowd at Hawker House – and came away winners as a result. Well, we all did really. Their charred aubergine in a soy garlic glaze, served up with a tomato salsa, toasted peanuts, fried tofu and garlic fried rice was a thing of wonder, and won them the Best Vegetarian category. “It was the toughest category this year” said Richard. “Another great indicator of how Britain’s tastes are changing.”

We had a TITANIC competition for Best Snack. The judges couldn’t be split between Homeboys from Nottingham and Wanderers Kneaded from Edinburgh. Homeboys got Matt’s vote for their “amazing” pig’s head croquettes, with Ben Ebbrell (of SORTEDfood) going for Wanderers. “Their sourdough was excellent, their Scottish buratta was genius. If we were judging a pizza competition, they would have have won.” Instead we voted to have TWO winners.

Jon Marsden-Jones, Michelin-starred chef at The Black Rat, fell for Flying Cow’s burgers. A champion of sustainable food, Jon liked that the Dexter beef came from Dan’s own farm. “That’s the way a burger should be,” he said of their Truffle Shuffle. Flying Cows also had a fan in Fay, saying that she’ll dream about it when she’s next hungover. The decision was unanimous. Flying Cows, winners of Best Burger in 2017, should win again in 2019.

You would have thought Robin from Buffalo Truck would be tired of the M6 by now. Not so – the multi award-winner of the Scottish Street Food Awards, all the way down from Edinburgh, was out for blood. And showing Londoners a bit of (fried chicken) thigh along the way. Falling in line with the overall “amazing standard”, said Matt, it was only due to Dan’s efforts that Robin headed back up the M6 without silverware.

Fay made a convincing case for MorMor as BSFA Champions. She said that their chicken shawarma “took shawarma to the next level” and felt that the other judges had criminally “overlooked” Hugo in their Champions considerations. Especially when MorMor’s vegan buffalo wings were taken into consideration. A BSFA might not go back to Leeds with MorMor, but plenty of love sure will.

MorMor’s queues were indicative of the public’s affections. Londoners know their street food so, in an arena like this, traders have to be better than what’s already out there. Fortunately for Makasih, their roti stood up against anything from Roti King or Umana Yana. Their butternut squash and blue rice curry won over the likes of Winnie, a 5-month-old who tried EVERYTHING at the Awards. Judging panel next year, Winnie?

Elsewhere, we had Kokodoo and their Korean Fried Chicken. If it wasn’t for Pabellón, Turo Turo and Kokodoo were Jon’s favourite traders. “That kind of food? I’d Deliveroo it” said Fay. Kokodoo Deliveroo? Catchy. All the way from Hull and, perhaps less befitting of Deliveroo, was Shoot The Bull. Matt was all up for their ‘beautifully sourced’ and of-the-moment lamb flatbread. Ben, meanwhile, liked the ‘Instagramable’ cheese-pull on the poutine.

Talking of Instagramable, Dolly Does It All won the Most Photographed All Weekend award. But Andrew works as a private chef and proved that there was more to Dolly’s success than her canopy and her paint job. It’s remarkable what he managed out of the back of a Citroen 2CV. Korean short rib? No problem when you’ve got a sous vide in the glove compartment. Lobster roll? Go on then. A flight of soufflés? Sweet and savoury? If you must.

It also turns out that beef brisket can win you a lot of fans. The ladies and gents from Hampshire – Need Street Food – racked up the public’s votes throughout the weekend, and were a hit among the judges too. In a lot of other competitions, their impeccable brisket sandwich “would have won the day” said Fay. People were also blown away by the fact that every sandwich sold helps pay for protein sachets to be distributed to areas facing acute malnutrition in the developing world.

Need Street Food shared the Most Sustainable award, sponsored by Hellmann’s, with AritSam. The Sustainable Restaurant Association, who wrote the Award’s guidelines, said that Need Street Food were always going to be a a tough act to beat. But ArtiSam, “who swallowed the sustainability manual” deserved to share the Award for their progressive attitudes – pickling leftovers and building an in-house aquaponic system to grow their own herbs and salad.

Going up against Utter Waffle in the dessert category, Flats also had it tough. While their vegan doughnuts – sweet flatbreads essentially, anointed with marshmallow fluff, Lotus biscuits and chocolate sauce – lived up to their name, their enthusiasm was anything but. Their only complaint? The high counters at Hawker House meant that customers couldn’t see the marshmallow fluff being torched. They LOVE their customer interraction.

It was our most sustainable ever British Street Food Awards. There was zero food waste, and Eighth Plate made sure that any leftovers were taken to people in the community who needed it. Meanwhile, Hellman’s, as sponsors, let the public in on what can be achieved with food that would otherwise be binned with their ‘real taste, less waste’ H Van. Whether it was potato gnocchi or any veg frittata, it showed what could be done with a bit of imagination. So who’s in for Sweden?

Sweet Fire: Figs and Nduja pizza topped with an exploded burratina and organic hot honey on a base of our unique sourdough.

MOST SUSTAINABLE award sponsored by Hellmann’s –

View our Awards Archive below