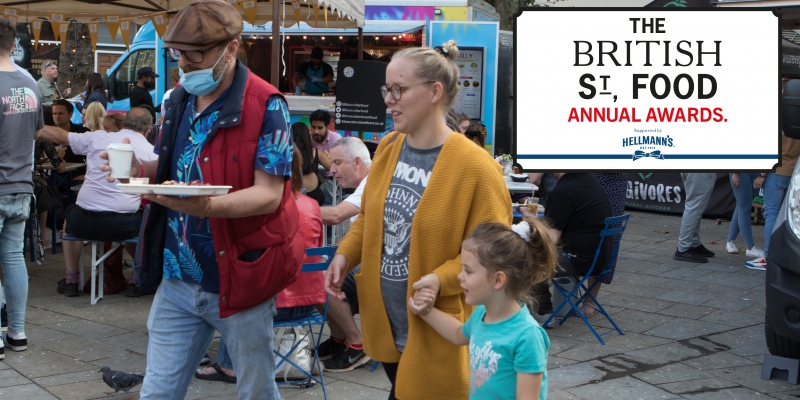 In a year where everything has changed, it’s nice to know that some things stay the same. Namely, Pabellon and Utter Waffle winning a public vote to qualify for the British Street Food Awards supported by Hellmann’s. In a safe – and sound – event, with clickers on the door monitoring our crowd numbers, more bottles of hand sanitiser than you can shake a stick at, plus a showing of lovely people who were desperate to do things properly, the Southern heat was a credit to our hosts Blue Collar Street Food. And the good people of Reading.

Blue Collar Street Food run the show in these parts. Glen and the team started with a food festival in Forbury Gardens in September 2016, which quickly led to their first weekly market, every Wednesday in the town centre. Since then they have launched a series of summer Feastivals, outside catering at Reading FC, monthly markets in Thames Valley Park and the Winnersh Triangle as well as new festivals in Henley and Guildford. When the time is right, and we’re allowed to run large events again, I’ve got a feeling we’ll be back…

The finalists for the Southern heat were:

Ehla
The Ehla menu is a fusion of flavours from the Eastern Mediterranean Sea – Cyprus, Greece, Turkey, Syria, Jordan, Egypt, Lebanon, Palestine and Israel. They’re a new crew, on the InKerbator programme in London, and that means a steep learning curve. “In July last year, we were trading in three places for the first time and had an evening event. But I forgot to take lights with us. We weren’t able to see anything and had to serve 200 portions in the dark. I now always remember to keep emergency LED lights under the van seat!”

Peru Sabor
Peru Sabor is a labour of love. “I prep between 4 and 5 hours each day on Wednesday, Thursday and Friday evenings” says Harry Perez. “Cutting, marinating and vac-packing the meat and preparing the vegetables and salad ingredients, as well as making all my sauces from scratch. I don’t use any preservatives, so everything has to be freshly prepared each week. I source my chillies from Peru (yellow Peruvian chilli and rocoto for the sauces; aji panka for the marinade base) as well as the organic quinoa that I use for the salad.

At around 3 am every Wednesday, I travel to East London to buy my meat from Smithfields market and get my vegetables at the International Western Market in Southall. After that, I’m straight to Reading to set up for the market. It would save time and money to shop more locally at Bookers or a local butcher, but I genuinely believe that the quality of produce makes the additional hours worthwhile. I’ve been featured on Channel 4, BBC Radio 4 and at the Pride of Reading Awards and we’ve had regulars that have come to us every week since we started.”

Not many people have tried Peruvian food – but it’s one of the world’s great cuisines. “And I would like to take the opportunity of the British Street Food Awards supported by Hellmann’s to introduce to you a special and iconic dish “Lomo Saltado” – a traditional Peruvian stir fry that typically combines marinated strips of beef steak with onions and tomatoes. This dish originated as part of the chifa tradition – the Chinese cuisine of Peru – though its popularity has made it a part of the mainstream culture. I only do it on VERY special occasions.”

Utter Waffle
Winner of 3 BSFAs in 2019, but back again – to try and win The Big One. Utter Waffle still feel like they’ve got more to give! They are still intent on taking the popular, much-loved waffle, upmarket – and turning it savoury. “In Utter Waffle’s relatively short life” says James, “we have achieved more than we could have dreamt. We won 3 of the 7 awards up for grabs at The British Street Food Awards, from 4,000 nominees, including overall People’s Choice and Best Dessert in the UK! This led us to compete in the European Finals in Sweden, transporting our food truck, 900 kilometres. We have featured Live on Channel 4’s Sunday Brunch, been interviewed on ITV News & been featured on an abundance of gluten-free blogs. We were selected to be a KERB trader, joining the best of the best in Street Food, and we were even listed on CODE Hospitality’s 30 Under 30…all before our first birthday! And there is plenty more to come…”

Sticky Beaks
The Sticky Beaks menu is all about slow cooked meats. And homemade rubs, sauces, marinades and accompaniments. Bex Lovell worked her way up from pot wash to chef in a pub of her own, but now she’s all about the immediacy of street food. “I love it when people come back and tell me that I have given them some of the best food that they have ever eaten” she says, “and that they’re amazed the flavours worked so well together. It makes all the shopping, the prep, the setup and the packing down really worth it. Even in the rain!”

Vegivores
Vegivores started trading in July 2017 – at Blue Collar in Market Place in Reading. Excluding lockdown, they have traded in the square every Wednesday since. They grew the business through trading at the University of Reading, Reading Football Club and local Berkshire breweries and have amassed a strong and loyal local following which helped them open their first bricks and mortar location in Reading in October 2019. A shoe in for the People’s Choice?

Halloumi Bite
Halloumi Bite is a family-owned business from Surrey serving authentic Cypriot food from a vintage Citroen food truck called Odyssea. ‘Odyssea’ because she went on an epic voyage before she ended her journey – in Surrey. Dimitri Sarris, the founder of Halloumi bite, left the world of Private Banking in London in order to follow his dream. His signature dish is the halloumi bite (although rarely eaten in the singular) – it’s a mouthful of authentic halloumi cheese from Cyprus, wrapped in crunchy filo pastry and drizzled in honey and black sesame the way Halloumi Bite only know how.

Gully
This is a story about a father and son. Sudhir, a retired IT veteran who was struggling to find his next challenge, and Avi, Sudhir’s son, who was looking to ignite his entrepreneurial drive. One night, over family dinner, Avi asked his father to pack some of his favourite lamb keema with peas and rice so he could take it for lunch the next day. It was delicious.
Over time, Avi’s colleagues kept asking about his lunches, till it became glaringly obvious. “Dad, anybody who eats your food cannot stop raving about it! London is crying out for delicious, authentic, practical Indian food.” On October 1 2019, Gully was born. The pair have now created the first interactive Indian street food truck in the UK. Designed by an artist in India, Gully uses images from Delhi and the Holi festival as well as iconic images from the London skyline and the witty observations of the British audience.

Rajiv’s Kitchen
Nepalese cuisine is often portrayed as a hybrid of Indian and Chinese cuisine. Wrong. Just ask Rajiv. “Nepalese cuisine is a food forged in the roof of the world and it proudly stands on its own”. The first ever Nepalese menu in the 10 years of the British Street Food Awards will be served in “saal ko paat” – leaves from the Shorea Robusta tree – and will certainly include Momos. These Nepalese bite-sized dumplings are every Nepali’s personal favourites. “Growing up” says Rajiv, “I used to eat them for breakfast, lunch and dinner. Which my mum did not approve of. We used to have Momo eating competitions amongst cousins during family gatherings and my personal record is 120 momos in one go. Yup! That’s my love for momos. Now I try not to eat as many but still can gobble down minimum 20 to max 40 in one go. Less than 15 does not count. So naturally I am nicknamed “Momos Monster” by everyone who knows me.”

Cheeky Burger
You would think they would have retired by now – gone off to polish their silverware. Cheeky Burgers are legends in their own lunchtime. They won the British Street Food Award for Best Burger back in 2016 – but this year they want to go one better and win the title of overall champion. They still make all their sauces in-house, including ketchup, but for 2020 they’ve got a new recipe. “Much deeper flavours” they say, “with aged beef, Red Leicester cheese and bone marrow onions”. Plus a red miso-marinated cod sandwich with Japanese slaw? One to watch.

WhatTheCluck
Team WhatTheCluck both come from food backgrounds – one in catering, the other strictly front of house. “But fried chicken is a favourite of both of ours” says Holly, “and after three months of trying to find that signature spice we really feel like we’ve nailed it!” You’ll be the judge of that…

Kokodoo
Street food isn’t all about the well-intentioned amateur any more. Having run a restaurant and several takeaway shops for over 10 years, plus qualifying along the way as Cordon Bleu, Joseph Yoon wanted to bring that knowledge and experience to the streets. With a menu of beautifully-presented classics, ranging from a Bibimbap of sauteed and seasoned vegetables topped with chilli sauce and spicy pork, to his KFC – Korean Fried Chicken – Kokodoo show how far street food in the UK has evolved.

Chipsmyth
These aren’t just any chips. These are Chipsmyth chips – handcut on the day and twice fried to perfection. Served with delicious toppings, from parmesan and truffle mayonnaise to British ribeye steak. The Chipsmyth are a father-and-son team from Windsor, Berkshire. “My father decided to start a business in street food as a mid-life crisis project and I unknowingly and foolishly followed him” says Louis Keen. “To our surprise, the food has been a massive hit with everyone we meet. This probably has something to do with his 35 years’ experience as a professional chef…”

ROK Kitchen
Two time regional finalists, and one time grand finalists, ROK offer up authentic Korean street food based on the flavours of South Jeolla province. “Street food gives me the chance to be my own boss, developing and serving food that I’m interested in and love” says ROK boss Steve Chatfield. “I really enjoy the spirit among traders – it doesn’t matter if I’m trading in the Isle of Wight and need a warm blanket at night because it’s freezing in my tent – the lady selling doughnuts is there to help out. Or giving marketing advice to an Italian couple in Hythe because they can’t understand why no one is buying their great food. It all helps to create a great community feel in what is a tough industry.”

Oink London
Oink London serve gourmet hand-smashed pork burgers and bacon butties together with sides of rosemary salted skin on fries in and around London. They are committed to sourcing bacon exclusively from British farms with a farm-to-table attitude, and for the BSFA 2020 are planning on doing little slider-sized tasters of their signature Notorious P.I.G (their most popular burger).

Pabellón
The current British Street Food champions. Back to defend their title, with extraordinary Venezuelan food. Expect slow-cooked meats and sweet fried plantain in freshly-grilled corn bread, with acid lime squeezed all over the Pico de Gallo salad. Helios and the team are also hotly fancied in the Best Looking category with an AMAZING new hydraulic truck – that comes with its own roof terrace!